When I moved to Long Island many years ago, people were surprised to learn that I had grown up on a farm. For some reason, I didn’t exude a farming persona. People would ask me what it was like and say how awesome it was to always have fresh cow’s milk, butter, beef and more. Living off the land must have been so healthy, they assumed. What they didn’t realize was that being a farmer meant sacrifice. Sure, we did have fresh cow’s milk. I still have memories of my grandfather trudging across the field from his farmhouse toward the barn early every morning and then repeat that same path in the evening to milk the cows. He would then pour the white liquid his livestock gave us into milk cans to be picked up by a local business, one that purchased it from him, and transported elsewhere. (I was a child so never really understood who made the purchase.) But neither he nor we certainly ever got rich from the sale. Being a farmer meant needing to find other means to make money and both he and my father also ran a sawmill, cutting lumber for the locals who needed it, while my father also worked for the town, eventually becoming Superintendent of the Highways. Hard work was not foreign in our home. Still, it was always a matter of scraping by. This meant that my mother had to pinch pennies when doing the grocery shopping.

So now when I think back on this, I realize that the choices she came home with weren’t often healthy ones but money-saving ones. While others had real butter, perhaps made from the cream of the milk grandpa sold, we always had margarine. We called it butter, but it wasn’t until I was much older did I realize the difference. When Birds Eye came out with Cool Whip in 1966, my mother thought it was astounding and convenient, especially since we didn’t have much real cream from the milk we kept. She also found she could get more for her money by no longer buying orange juice but taking advantage of the powdered Tang that would last for weeks while OJ would be gone in record time. I suppose another advantage to this was because the weekly grocery shopping would be on Friday nights when my father could take the half hour drive with her to the grocery store. What they bought needed to last the week. And in the winter, if the snow was blowing, sometimes those Friday night jaunts had to be postponed.

As a kid, I thought we were just staying with the times when seeing the Tang on the shelf and Cool Whip in the fridge, but it wasn’t until I overheard a visiting aunt ask my mother if she no longer perked “real” coffee when my mom had Taster’s Choice on the kitchen table. My mother was stunned since she felt our company would’ve been impressed that we were staying with the times by having instant coffee. They were not and the percolator was brought back out.

The point of all this I suppose is that when I read about how farmers are struggling, which isn’t anything new, I am reminded of the sacrifices we must have experienced in my family. However, we always had food on the table and a glass of milk to wash it down with. But then, over time, as my grandfather got older and my father’s job as superintendent took much of his time, as did the sawmill, the animals were sold and we were like so many other farmers and eventually called it a day since none of my siblings wanted to try to make a go of it. After all, the challenges were obvious. But the barn still stands, and for me, it’s a gentle reminder to appreciate the farmers who struggle to make ends meet. 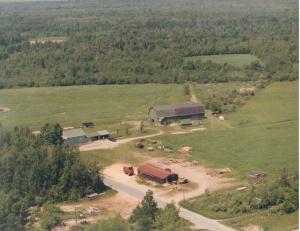 The farm I grew up on.