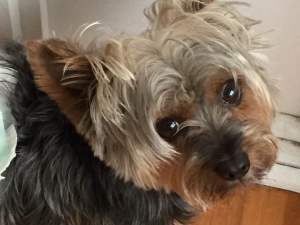 Anyone who knows the story of Logan, the Yorkie that I rescued about five years ago, may understand the anxiety I am feeling about the decision I must make. For the last several days he’d refused to eat and only wanted to sleep. A couple of times he vomited bile, while another time when he’d seizure blood came out of his mouth. Now anyone who doesn’t know Logan’s history would think it was time to rush him to the vet. But Logan’s life has been a difficult one while I have a friend who refers to him as Phoenix since he always seems to rise from the ashes of potential demise.

See, when I first got Logan, who had a different name then, he was seven years old and rescued from a “home” where the DA had to be involved due to how he’d been treated. I won’t go into the disgusting details, but I do hope justice was served to the person who caused harm to this little guy. I was only asked to foster him since I lived close to where he would need a weekly vet visit for his broken foot. When I first brought him to my home in a crate, I had no idea what he looked like or how he’d react to me, a stranger. While I sat down next to his carrying case, tears streaming down my face knowing what had been done to him, I opened his crate door to let him come out on his own time and terms. I was going to wait for him, no matter how long it took. To my surprise it didn’t take long. He had every right to tear out of there and attack me, to defend himself, and I was half expecting as much. However, instead, ever so slowly, the little guy hobbled out, his back leg in a cast, came up to me and licked my hand. Pretty much right then and there I knew I was going to be a foster failure and become his warrior mom.

Fortunately, after weekly visits to the vet, his leg healed. Initially, the vet was considering amputation, since that is how bad of a break the leg was. However, with the vet’s and my care, Logan rallied and was soon a part of my family, playing with toys and being my companion. (Or was I his companion?) Every time I came home from being somewhere, he’d greet me at the door, unable to contain his excitement and put a toy in his mouth and run around in circles until he could calm himself down.

Then something began to go wrong around holiday time about four years ago. He started having seizures—naturally on a weekend—and my daughter and I rushed him to the animal hospital. They kept him for a few days, not too certain what was causing it. I then had him released and brought him to my vet who wasn’t sure what it could be but did suggest something called a liver shunt. They felt he was too weak for surgery.

So, while Christmas lights on the tree sparkled, Logan lay in his bed whimpering. I couldn’t get him to eat or drink. At times, I was sure he passed, but then suddenly I’d see the rise and fall of his chest and know there was still breath of life in him. A couple of different people then told me about a holistic veterinarian who was in the Hamptons. I made an appointment and my daughter and I took the drive there. After examining Logan, the vet gave me some herbs to start giving him. Meanwhile, my very good friend was researching Logan’s symptoms online using the words “liver shunt” and found a site that had a recipe to give dogs with this condition. The recipe included lots of vitamins, brown rice, dark chicken, spinach, cottage cheese and canola oil. I fixed a batch and initially had to practically force feed him, but eventually he started eating it. And then getting stronger. What I noticed was that his personality wasn’t nearly as jovial—no more did he greet me at the door when I came home, but he did like to stay with me. And so for a couple of years he was doing great, with setbacks every now and again, making us think this was it. But then he’d rally.

But now, this is probably indeed it. I took him to the vet yesterday who is amazing but said there was nothing he could do for Logan, that he could be experiencing pain and was so very weak. He then said, “So, what do you want to do?” I knew what he was asking. It’s not like I haven’t had other dogs and had to make this difficult decision. However, that morning just before my son and I brought him to the vet, Logan did eat some of his food, something he hadn’t done for a few days. Not a lot, but enough to make me wonder, is this just another setback where he’ll rally?

So, I said I wanted to bring him home. I wasn’t ready to make that tough decision. Yet, I keep looking at Logan, who is sleeping in his bed next to me as I write this, wishing he’d tell me what he wanted; wishing he’d give me a clue. Or maybe I’m purposely ignoring those clues. I still feel like his warrior mom needing to fight for him. But maybe I’m just being selfish and it’s time. Maybe he’s rallied all he could rally and wants to just go in peace.