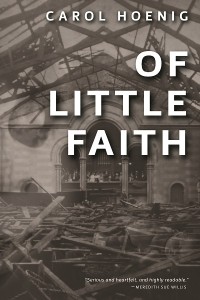 It’s official—signed contract and all—and now Carol can share a piece of good news: After reading the eBook version of OF LITTLE FAITH, Steel Cut Press, a small but growing publisher, made Carol an offer she couldn’t refuse. Now her novel will soon be available for those of you who prefer a physical book! So very excited! Look for more to come about this venture…

The Vietnam War is on the nightly news and women are burning bras in the fast-changing world of the 1960s, but thirty-year old Laura wonders why her choice as a feminist couldn’t be to have a baby without marriage. Laura not only has to justify her desire to her forward-thinking friends, but to her fundamentally religious siblings, as well. Yet, her most important mission is to find a man who will agree to impregnate her and then get out of the picture once the act is accomplished. Four narrators push along this charming tale set in 1960s Seabrook, Long Island, as three adult siblings converge in their recently deceased father’s home. Laura is a 30-year-old newspaper columnist from New York. Her brother, Eric, is a compassionate minister trying to find his faith, and sister Beth is an angry and disapproving fundamentalist who is determined to hinder her siblings’ desires in the name of her religion. They share the narration with Eric’s wife, Jenny. Tragic secrets are revealed without resorting to high drama in this portrayal of two separate halves of counterculture and suburban banality. Readers will find Of Little Faithby award-winning author, Carol Hoenig, to be uplifting and heartfelt in the most surprising of ways.

Reviews for OF LITTLE FAITH:

“A raw yet sensitive portrayal of hypocrisy set against the backdrop of the tumultuous 1960s presents the struggles of a liberal woman in the context of her conservative family and upbringing.

Brutally frank and devastatingly real, this exceptional novel explores the dynamics of a dysfunctional family while calling attention to hypocritical behavior. Dredged memories of clergy pedophilia during the 1950s mingle with suppressed sexuality and feminist perceptions of a biblical world. Narrated from the distinctive viewpoints of four protagonists, the story reveals that interpretation of religious structure is highly personal, not a matter of dogma.

Two sisters, a brother, and a sister-in-law cannot agree on whether to sell their childhood home that is occupied by the sibling with a zealous attitude toward fundamentalist religion. Pitted against this woman are her liberal sister, Laura, who wishes to have a child without the entanglement of marriage during a time when it remains unacceptable, and her brother, who is a married minister who remains childless.

Laura, having been molested by a pastor, maintains a straightforward, carefree lifestyle that showcases the flaws of conservative purists who resist change. Through Laura’s eyes, a sincere desire cannot tolerate a “should” or a “must” in a preordained plan; rather, it is the spontaneity of living that enlightens those who seek the guidance of a higher power.

Filled with twists and surprises, this absorbing novel fulfills expectations without giving itself away. The end will astound even the most jaded. Meticulous effort, as well as personal experience, enhances the authenticity of Hoenig’s work, bringing to light a captivating though frightening decade. Women’s rights, the Vietnam War, and civil-rights protests set the backdrop for this engrossing exploration of human character.

Carol Hoenig is president of her own publishing consultant firm and an award-winning author with a gift for insightful storytelling. Her involvement in fundamentalism and later rejection of the church bring to light this sensitive portrayal of a fascinating cast of characters.

I had to share with you that my mother-in-law is your newest fan. She was book shopping in my bookcase and picked up Without Grace. She said she loves your style! She said she has been reading books lately out of desperation, and when she started yours, she finally felt like she found a book she can truly enjoy! I will be buying Of Little Faith ASAP and sharing with her. –Michelle Levine

I read “Without Grace” on vacation at a lakeside cabin years ago and enjoyed it immensely. I have been awaiting Carol’s second book since then. I too am a member of a book club that meets monthly, so I was thrilled when we got a chance to read “Of Little Faith”. I was busy with work studies at the time so I thought I would read it toward the end of the month, but that first night I had to read the first chapter just to get the feel for the story. Big mistake, Sucked me right in, read in bed till way past my normal bed time. That next day instead of going to the gym I sat on the couch till I finished the book. There are not to many books that I read straight through, this was one of them. I enjoy the way Carol entwines her characters. Even if you dislike some of the characters you want to know more about them, and the ones you love, you actually become emotionally connected to. What can I say except that I gave it 5 Stars. Great book for a book club because you will want to discuss it with others. —Gerald Basile

Right away I was pulled into this story. Every character was so interesting, even if some of them made me angry at times. What I liked about this is that it kept me on my toes. I thought maybe the story was going to turn out differently, but after reading Carol’s other stories and books, I knew she wasn’t going to take the copout. Like her novel, “Without Grace,” I could see this being made into a movie, too. Now, I’ll be waiting for her next book! –Connie

This is a book that will get you to think. It will tug at your heart strings. It will re-affirm that all families share both good and bad experiences and show you how all individuals grow up with different ideas. Ideals can be off-the-charts different, but everyone has a desire to love and be loved, no matter how twisted it can seem. This was used in my book club and it brought up a passionate conversation filled with strong ideas. –Lisa Szeto

Ever since I read Carol Hoenig’s novel, “Without Grace” and heard that she had another novel in the works, I have been waiting to have the opportunity to read it. “Of Little Faith” is about one family that has been damaged by fundamental religion. My book discussion group actually had the opportunity to read it in manuscript form since we are friends of Carol’s and we ended up talking for a couple of hours about the different points of view that the story brings out. We all agreed that we enjoyed this novel very much and found that it stirred a number of questions that we needed to ask ourselves when it comes to faith. I think this would be a perfect selection for any book discussion group. –Bookgroupy